The 2015 Alumni Recognition Award (ARA) winners are Dr. Janet E. Furness ’70, Rev. John L. Crans ’72, and Troy L. Brindle ’93. Every year, the ARA is given to an alumnus or alumna who has uniquely distinguished himself or herself in fulfilling the University mission of service to Christ in the church, society, and world as a biblically minded, well-educated, and professionally competent man or woman of character. Dr. Furness, Rev. Crans, and Mr. Brindle were recognized at the 2015 Fall Commencement.

Dr. Janet Furness
Dr. Janet E. Furness is a social work educator, agency administrator, and community organizer. Her motivation comes from Isaiah 1:17: “Learn to do good; seek justice, rescue the oppressed, defend the orphan, plead for the widow,” although growing up as eldest daughter of Dr. Charles (founder of Cairn’s social work program) and Margaret Furness had a strong influence as well. Currently semi-retired and serving as adjunct faculty in Nyack College’s MSW program, Furness has been the director of MSW programs at Roberts Wesleyan College, Union University (where she also served as associate dean), Ramapo College of New Jersey, and Carver School of Church Social Work at The Southern Baptist Theological Seminary. Engaged in various writing pursuits, she sits on the editorial board of the Journal of Social Work and Christianity and is a site visitor for the Council on Social Work Education.
Prior to entering higher education, Furness directed child placement services at Goodwill Home and Rescue Mission (Newark, NJ) and Christian Homes for Children (Hackensack, NJ), then later worked at the Mental Health Association of New Jersey as statewide director of volunteer programs. There, she organized parents whose had children in the state’s mental health system, resulting in the formation of the Statewide Parent Advocacy Network (SPAN), which today is completely parent-driven. Furness remains involved in congregational social work.
Dr. Furness received her BS in Bible from Cairn University in 1970, her MSW from Rutgers University, and her EdD from the University of Rochester. Her dissertation was on social work education as innovation in evangelical institutions between 1960 and 1985, focusing on three case studies: Philadelphia College of Bible, Eastern University, and Carver School of Church Social Work at The Southern Baptist Theological Seminary.

Rev. John Crans
Rev. John Crans, known as Jack, serves as the administrative chaplain at Chester County Prison, the executive director of County Corrections Gospel Mission (CCGM), a chaplain for the Pennsylvania State Police, and an honorary chaplain of the Chester County Fraternal Order of Police.
Prior to serving at Chester, he served as a youth director/associate pastor at Kennett Square Baptist Church and the senior pastor at Hephzibah Baptist Church. In response to prisoners at Chester, Crans also established City Gate Mission in 1980, which offers meals, housing, clothing, and Bible studies to men who are homeless and reentering community from prisons. In 1992, CCGM purchased Old Mill Bible Conference in Brandamore, PA, in order to develop the land as its ministry headquarters and make an impact on children of inmates from neighboring cities, such as Coatesville, Chester, and even New York City. The children, youth, and families of Coatesville, in particular, have long been the focus of many ministry initiatives at CCGM.
As chaplain of the Pennsylvania State Police, Crans voluntarily serves the Embreeville Barracks (Troop J), serving as a grief counselor and pastor to all the troopers, command staff, and their families as needed. Chaplain Crans has helped host the Pointman Leadership Institute’s “principle-based leadership seminars” and serves as a team director for PLI. In recent years, more than 380 command and line officers have graduated from Pointman Leadership Institute at the Pennsylvania State Police Academy at Hershey.
Crans attended Houghton College in New York from 1968 to 1969 and Cairn University from 1969 to 1972, graduating from the Bible Social Work program. He also earned his MDiv from Eastern Theological Seminary in 1976. He states, “My undergraduate schooling both prepared me in the study of sacred Scripture and also trained me through constant placements for chaplaincy experience with precious lives locked up in institutions. Many of these individuals are suffering from mental illnesses, violence, and fatherlessness.”
He has received several awards for his work, including the Social Work Award from Cairn University (1996). CCGM was awarded the 2015 Great Commission Award from the Association of North American Missions. The Great Commission Award is given for outstanding, widely recognized contribution to the cause of Christ, especially in North America.
Crans has been married to Susan Henry for over 44 years. They have three sons, who are all involved in ministry or, as Crans sees it, “lifetime service for Jesus Christ.”

Troy L. Brindle
Troy L. Brindle is the president of the National Association of Social Workers Pennsylvania (NASW-PA) since July 2015 and is the co-owner and Director of Business Development for Springfield Psychological since 2002. He is also on the executive board and delegate assembly of the NASW-PA. Brindle has over 25 years of experience in administration and direct clinical practice to children, adolescents, adults, couples, families, and older adults.


Prior to his work at NASW-PA, Brindle served as the executive director of Professional Meditational Associates, Inc., a site director of Springfield Psychological, a senior clinical director of child and adolescent services at Friends Hospital, a program director of child adolescent services at Foundations Behavioral Health, and a social worker at The Horsham Clinic.
He earned a BS in Social Work and BS in Bible from Cairn University in 1993 and went on to earn his MSW from Rutgers University in 1995. He is a licensed social worker, qualified clinical social worker, and licensed clinical social worker. In 2009, he received a doctorate in clinical hypnotherapy from American Pacific University.
Brindle has experience in a wide range of counseling and services: cognitive behavioral therapy; mindfulness; insight-oriented, relational, structural, and family therapy; stress management; play therapy; behavioral therapy; hypnotherapy; grief and trauma; physical, sexual, and emotional abuse; Christian counseling; eating disorders; Internet, technology, and sex addiction treatment experience; parent coordination services; court counseling services; and parent/child reunification services. Reflections From the Ranch [From the Bucks County Courier Times]

When I was a much younger man, I worked as a wrangler and horsemanship instructor while learning to train horses. In the process of working with young horses, I found 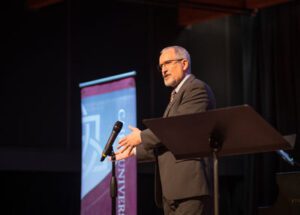 On January 23–26, 2023, Cairn University hosted World Reach Week. Building on the theme “Right Here, Right Now,” speakers and events focused on the work of participating in and anticipating A 2022 Pew Research study suggests 18–35-year-olds are leaving the church at alarming rates. In this podcast, we dig into the data with several local pastors to find out what This past semester, the Faith and Liberty Discovery Center (FLDC) reached out to Cairn’s visual arts department requesting a project. The project parameters consisted of six individual murals that were